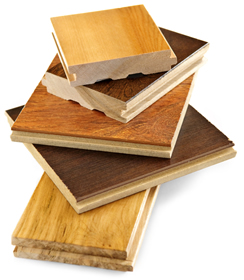 Perhaps the earliest mention of wood flooring on record dates back to 950 B.C. when King Solomon specified wood flooring for his famous temple: “(he) covered the floor of the house with planks of fir.” Also: “(his own house) was covered with cedar from one side of the floor to the other.”

Mosaic wood floors as we know them today were probably first made in Italy, and from there were introduced into England, France, Germany and other countries of the Old World. The Herringbone design was probably the first mosaic pattern.

English romance and history from the times of King Arthur’s legends make reference to “sturdy oak floors.” In 1678 John Evelyn wrote that some of the rooms in the Duke of Norfolk’s palace at Weybridge were parqueted in cedar, yew and cypress.

The classic French pattern, Fontainebleau, was extensively used on the Continent in such places as the Palace of Fontainebleau and Versailles’ Petit Trianon, the private retreat of Marie-Antoinette. This meter by meter pattern, which dates back at least to the middle of the sixteenth century, also enhanced the Louvre, the Chateau Compiegne and many other historic chateaux and palaces. At Chantilly the pattern was modified with the interior squares laid square with the outside bands. In La Galerie d’Apolion in the Louvre these two patterns alternate in the same room giving a truly custom effect. Most of these fine French floors were handcrafted in quarter-sawn white oak with its distinctive medullary rays. The European Marie Antoinette pattern was apparently used as a simpler variant of the Fontainebleau design. One can find this floor in the throne room of the Palace of Luxembourg. The popular Haddon Hall design comes to us from a stately mansion in England called Haddon Hall.

The first wood floors in the New World were hand-hewn planks held in place by square pegs and butterflies. One of Colonial America’s first parquetry floors was laid in Thomas Jefferson’s residence, Monticello, outside of Charlottesville, VA, in 1804. This 18″ X 18″ design with a cherry center surrounded by beech pickets drew the comment from a family member nearly seventy years later: “After use and abuse, a half hour’s dusting will make it compare favorably with the handsomest tessellated floor.”

In the 1880’s a prominent Rochester, NY, physician made an ornamental parquetry floor for himself. From this man’s hobby sprang Louisville’s Wood-Mosaic in 1883, the forerunner of today’s custom wood floors in the U.S. And in 1977 Kentucky Wood Floors was founded. (See “Who We Are” for more info on Kentucky Wood Floors & Louisville Wood Floors.)

We offer a wide variety of domestic and imported wood species.